You are here: Home1 / Blog2 / Resources for Actors3 / Riad Richie on His Season with the RSC

Riad Richie debuted at the RSC for their 2018-19 season, performing in Tamburlaine (Michael Boyd), Timon of Athens (Simon Godwin) and Tartuffe (Iqbal Khan). His previous credits include Macbeth, Mark and the Marked, Frankenstein, Romeo and Juliet (Box Clever Theatre) and The Scarlet Pimpernel (Tower of London). Riad has also been lead fencer and combat specialist for films including Cinderella, iBoy and Accident Man.

Say one thing for Richie, he knows how to make an entrance. From abseiling onto the stage in Timon of Athens to beatboxing against the backdrop of Iqbal Khan’s concert lighting in Tartuffe, he commands attention, and with a stage presence that fills the theatre, Richie is the kind of actor you just can’t take your eyes off. Throughout the RSC’s winter season, his performances have been captivating, effervescent and delivered with a touch of class. His portrayal of the fiercely loyal Usumcasane in Tamburlaine being particularly memorable for precisely those qualities.

As he now enters the final week of the season and looks ahead to the future, he is certainly an actor I’m sure we’ll be seeing a lot more of. I sat down with him to reflect on his time with the RSC.

Quite surreal. You really get a sense of community from day one. It’s like going back to uni. When you move to stratford, you are in this campus-like bubble where everyone is friendly and knows you and it’s a little bit magical.

As an actor, what challenges did you face and how did you overcome them?

Being in three shows can really put a strain on your daily life. Understudy rehearsals pretty much take up your free time, so it’s all about managing your day so you don’t feel overloaded. You usually rehearse two shows at the same time, meaning you can be in one room for the first two hours then whisked into another room for the next. Getting into the right mindset for the needs of each room took some getting used to.

What did you enjoy most about working with the RSC?

The freedom to be bold. In all three shows, I’ve been so grateful that I was always able to make an offer in the rehearsal room, no matter how absurd, and the company gave you the vibe that you could do that and take leaps. So now I beatbox in one show, abseil in another and I’m an ultra-violent killing machine in the other.

Was there anything you didn’t expect?

The hospitality. The RSC don’t just support you on stage, they ensure you are well looked after physically and mentally, even if you just need to talk to someone. If you’re up in Stratford by yourself, things can get lonely at times. The RSC became like a surrogate family for those days. Something else I didn’t expect was the ‘Shakespeare Gym’: workshops for company members in which you get to explore and break down texts of the Bard.

He was like Yoda of the theatre world. You could really feel the weight of his presence in the room and all you wanted to do was listen. He’s incredibly generous and receptive to everyone whilst steering the ship towards his vision. Working with Michael was my first experience at the RSC and it was an undeniable pleasure.

Being on stage for the past three and a half years means that my showreel has become stale. I think I’ll be getting that updated to cater for film/TV work. I’m also currently in talks with the team at Ragdoll but I can’t say too much about that right now. Who knows, maybe I’ll be back on the Swan stage sooner than I thought! ;) 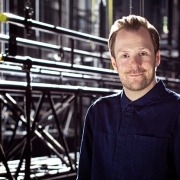 Olivier Award-winning Director, Donnacadh O'Briain: "The Drama is Always First for Me"
0 replies