Celebrating five decades of Asian life in Leicester through food, arts and culture, BBC Radio Leicester’s Asian Life Festival explored all aspects of the journey so far that have made Leicester the incredible city it is today. Part of the festival was ‘The Good Companion’, a skit written by Divya Ghelani, which I had the pleasure of directing.

In May 1974, over 500 black and Asian workers at Imperial Typewriter Co. on Leicester’s East Park Road, went on strike against unequal pay and racism on the factory floor. The so-named ‘Asian Worker’s Strike’ was unofficial and unsupported by the local TGWU who many said were in cahoots with the factory management. It is one of the first stories of resistance for Asian workers and yet it has been excluded from Leicester’s recorded history. Part of my own family were Ugandan Asian refugees so when I heard the premise for the skit, I was captivated by the story and excited to come on board, but at the same time shocked to have had no prior knowledge of the events that took place. 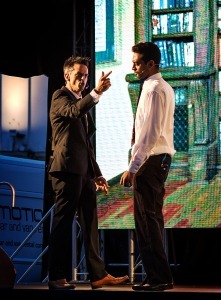 The following is an extract from a conference paper presented by Evan Smith at the 2008 Social History Society conference in Rotterdam:

“The strikers claimed that the ‘white workers don’t suffer from the same degree of discipline as blacks do’… they were quoted in New Society as stating, ‘This discrimination is quite peculiar because it is so hard to nail. It is the racialism that you feel but cannot overtly see, that exists at Imperial’.

The representative of the TGWU for Imperial Typewriters was George Bromley, who objected to the unofficial nature of the strike and the demands being made. Bromley criticised the unofficial measures being taken by the Asian strikers and their apparent disregard for the ‘proper disputes procedure’, stating that the strikers ‘have got to learn to fit in with our ways’.”

The Good Companion was performed by local Leicester actors Marcus Langford and Krish Bharat. It followed a film that included interviews with Ugandan Asian refugees discussing the hardships of working in factories in the seventies.

The festival was an enlightening celebration of Asian history and life in Leicester and I am extremely proud to have been a part of it.