You are here: Home1 / News & Advice2 / Resources for Actors3 / How to Utilise Social Media: A Guide for Actors and Creatives

The performing arts industry is changing. More and more casting directors, directors, agents and theatres use social media as a vehicle for their latest project, and I’m not just talking about student films and profit shares. Major castings are regularly opened up to the twittersphere; at the time of writing this, a quick search on Twitter found recent casting calls from Kahleen Crawford (‘I, Daniel Blake’, ‘The Miniaturist’), Jina Jay (‘Bird Box’, ‘Rogue One: A Star Wars Story’) and Des Hamilton (‘This Is England’, ‘Bronson’). It’s never been more important for actors to have an online presence and if utilised correctly, social media can be an incredibly powerful tool. But where to start?

Which Social Media Platforms to Use

The three main platforms are:

Aside from creating a Facebook profile, you can also:

Facebook is great at allowing people to have long discussions without comments getting lost in long Twitter threads.

Twitter
On Twitter you don’t have friends, you have followers, and it’s this detachment that separates it from Facebook. Following someone on Twitter doesn’t carry the same meaningful relationship that is associated with friending on Facebook. Twitter is a great place to stay up to date with the latest news, topics, projects and campaigns from industry professionals. There’s also a wonderful community of creatives that support each other by sharing CVs, showreels, advice and daily inspiration. Right now, Twitter feels like the place to be for creatives. If you only had time in your life for one social network, I’d argue that Twitter would be the most valuable.

Instagram
Instagram is a visual platform. People follow accounts that post images and videos that they’re interested in. Instagram is perfect for keeping your followers up to date with what you’re working on: a backstage photo of the cast or a behind the scenes snap on set for example. It’s also one more place to stay up to date with industry goings-on. Follow your favourite theatre festival, headshot photographer, actor, casting director…you get the idea!

If you want to use social media in a professional capacity, you may want to keep your personal accounts separate. Creating a new account for you as an actor/creative will allow you to keep your content relevant and those embarrassing holiday photos private. Employers may vet their actors before employing them, and even if they don’t the public certainly will so be extremely careful about what you put out onto the internet. There have been countless examples of when an inappropriate tweet posted ten years ago has come back to haunt an actor and ultimately cost them their career. A private, personal account is a safer forum to express yourself but there is no guarantee something won’t get out. As a professional, the safest option is to never post anything unseemly in the first place. Think before you post.

How to Get More Followers

Getting more followers comes down to being active, relevant and posting high-quality content. Being an active social media user as a professional can feel like a full-time job, especially when working across multiple platforms, so it’s important that you retain a level of authenticity in your online persona.

Twitter has a 280 character limit, which isn’t a huge amount. It’s perfect for when you want to start or join a conversation about industry-related news by throwing in your short and concise two-pennies. It’s also great for posting external links to the latest articles or blog entries.

Facebook has no limit on post length and therefore is better suited to more in-depth posts. I’ve seen countless pitches for crowdfunding on Facebook that have drummed up huge support and made a film project possible that otherwise wouldn’t have been. It’s also an invaluable source of advice and support from other creatives. However, a word of warning: posting in some of the bigger acting groups on Facebook can open you up to a deluge of well-meant advice that isn’t always that useful. As with any forum on the internet, take everything with a pinch of salt.

Instagram is for all your photos and videos. Let people know what you’re up to. With both Instagram and Facebook, you can either post content to your profile or post to your story, the latter giving your followers a glimpse into your life that’s then available to view for 24 hours. Another word of warning: be careful what you post. Once it’s on Instagram, even if it’s only on there temporarily in your story, it’s pretty much immortalised and inappropriate content could come back later in your career to bite you.

When you have something to say or share you want to maximise engagement and reach as big an audience as possible. To do this, you’ll want to get a general idea of when the individual social networks are at their busiest. A quick Google search will return a plethora of surveys and studies into the best times to post. Here’s an article by Sprout Social that tracks engagement over the course of a day for each day of the week.

If you’re working two jobs and running to auditions in between, you may find posting at specific times difficult. That’s where social media schedulers come in. There is a multitude of software available that allows you to compose posts and publish them automatically at set times across a wide range of social media platforms simultaneously. A scheduler can make your life easier if you don’t have a lot of time and/or want to post regularly. A scheduler isn’t going to make you an overnight social media success, but it might just help to manage your time.

Two of the most popular schedulers are Hootsuite and Buffer. Both have free and paid plans available.

At the top of this article, I mentioned a few big casting directors who’ve recently put castings out on social media. Only this week I’ve seen several casting calls for Netflix films on Twitter. If you see something you like, research the casting director and follow their social media account. It’s perfectly possible to land yourself a big casting by responding to a post. Having said that, social media is also crammed full of not-so-good jobs and opportunities. Through my community-based Twitter account, @TheActorsPlanet, I recently started the hashtag campaign #PaidOrNot which strives for clarity and transparency in casting calls posted on Twitter. Equity also started the hashtag #ProfessionallyMadeProfessionallyPaid which is their campaign for decent pay. Make sure you find out the details for any opportunity you apply for and research the person who made the post to make sure they are a genuine, reputable employer. There are lots of dodgy casting calls out there that evade the moderation of Equity and Spotlight.

The Laid Back Approach

As useful as social media can be it can also be addictive and demoralising. The instant validation of twenty likes and six retweets is a great feeling! So when your next tweet that you’re passionate about gets no engagement at all, it can leave you feeling low, wondering what went wrong. You can spend hours trawling Google, reading articles like this, learning how to utilise social media and absorbing all the statistics and trends you like, but what you can never prepare for is the unknown variable. Sometimes a post gets missed. It ticks all the right boxes but for some reason, it simply falls through the cracks. My advice is not to invest too much in likes and shares. Post because you want to and don’t get too bogged down in what comes after. 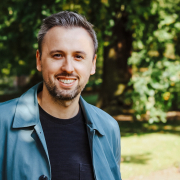 Jamie Body On The Business of Show Business
0 replies

“To Be Seen” by Kieran Vyas and Katie Burchett